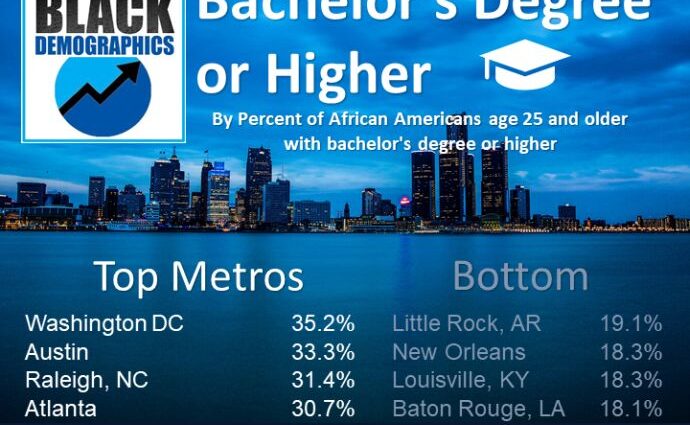 Below is a total list of 267 metro and micro-politian areas split into three categories based on adult Black population of 25 and over Starting at:

Where does your city or town rank?

Tell us why you think it’s right or wrong.

To view the full infographic of large metros (featured on top)scroll to the bottom of the page.

The percentage of African Americans with higher education often corresponds with the health of the economy of that metropolitan area. Places with growing economies and employment opportunities tend to attract people with degrees.  This can also have a negative effect on metro areas with lower educational attainment because they tend to lose their college educated residents to metros with better opportunities, a phenomenon known as “brain-drain”. So cities like Shreveport LA, Flint MI, and Cleveland OH often lose their college educated residents to places like Washington DC, Austin TX, and Atlanta GA.

1. Percent of African Americans with a bachelors degree or higher by metropolitan areas with Black adult populations of over 50,000.

3. For metro and micro-politian areas with Black adult populations between 5,000 and 15,000

Below is a list of top and bottom large metropolitan areas with Black populations of more than 100,000. Feel free to share this image anywhere you please.