The New Orleans Metropolitan Area has the 16th largest Black population in the United States.

The Black history of New Orleans is unique compared to that of African Americans in other US cities.  New Orleans was once Spanish, and then a French territory before the United States acquired it through the Louisiana Purchase. Most African slaves there came from French territories of Africa and mostly from Haiti, a French controlled part of the Caribbean. Under French rule, many Africans, French, Spanish, and Native people mixed forming what became known as the Creoles of Louisiana. Creoles enjoyed many privileges only bestowed to whites until the late 1800 when they were reclassified as Black and forced to live among, mix with, and follow the same rules as Blacks. The Black Population on the other hand was able to retain some African traditions and culture under French rule.

Combined with the culture of the Creoles, the New Orleans Black population has always been unique to America. In August 2005, Hurricane Katrina hit New Orleans damaging the Levees which kept the city from flooding. Because the city sits below sea level, 80% of the city flooded and it took weeks to drain out the water. The city still has yet to recover. Much of the largely poor Black population has been unable to return and is now spread across the country. The largest numbers of Black evacuees have started new lives in cities such as Baton Rouge, Houston, Dallas, and Atlanta. 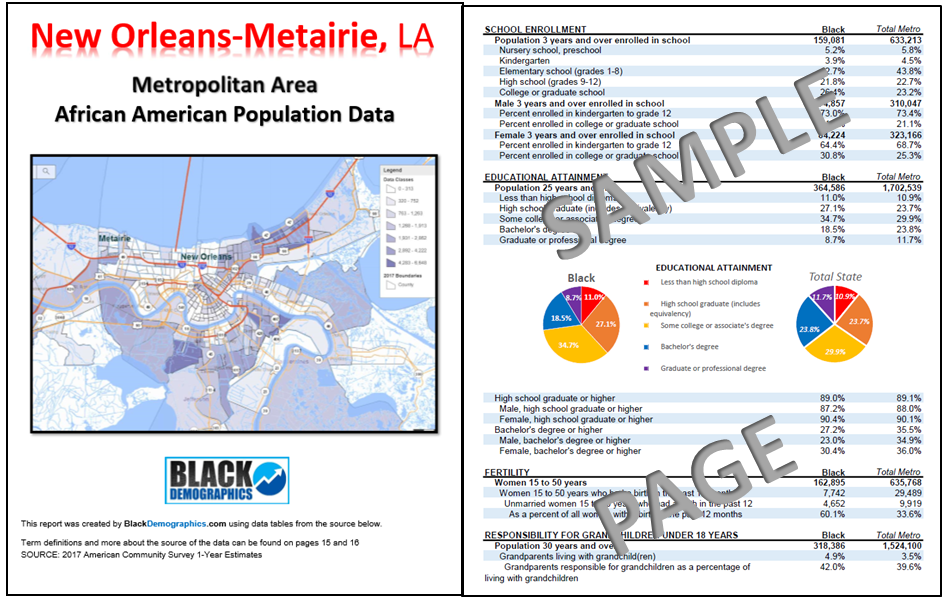 This report includes 289 data comparisons regarding 33 topics 26 charts and graphs including:

For any questions or issues related to viewing and/or downloading this report contact:
akiim.deShay@onlymoveforward.com

For any questions or issues related to viewing and/or downloading this report contact:
akiim.deShay@onlymoveforward.com