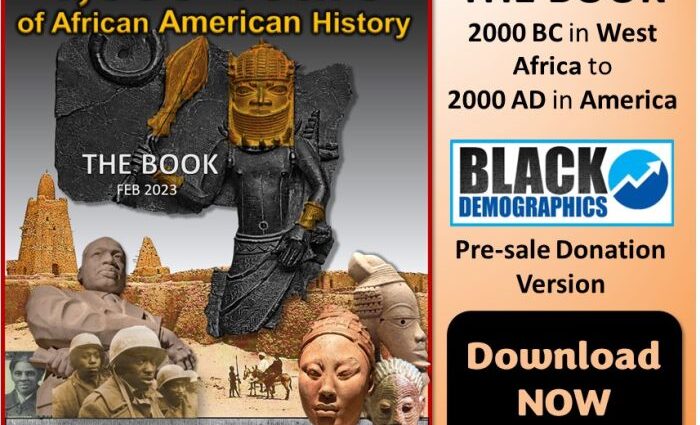 Get Your Digital Copy of Our Next Big Project

Your donation will help fund the completion of this project by its deadline. It takes a lot of man hours to put 2 years of research together into one book. Other costs include image rights, editing, and publishing fees.

All credit card transactions are handled by PayPal. Blackdemographics.com has no access to your credit card details. We will only have your name and email to send you the book link in the receipt.
Scroll down for a detailed outline.

See What’s in the Book Below

PART 1: The Empires of Gold

CITIES OF THE NIGER RIVER

THE AKAN KINGDOMS OF THE IVORY AND GOLD COASTS

-What about Egypt and Nubia (The Afro-Asiatic)

Ancient Nok of Central Nigeria (1000 BC)

DEMOCRACIES OF THE IGBO

PART 3: The End of the Golden Age: Europe comes to West Africa.

The fall of Constantinople

FROM AFRICA TO NORTH AMERICA

1776 Slave Economy under the US Constitution

The making of an American slave

PART 7: Emancipation and the Great Migration

free digital copy when it is complete (projected for February 2023)

All credit card transactions are also handled by PayPal. Blackdemographics.com has no access to your credit card details. We only use your name and PayPal email to send you the book when it’s ready.