Before it became the 32nd state in 1849, Black people were migrating and documented as born and established in Minnesota. At this time, 40 free persons were recorded in the census and no slaves were reported, however, a small number of up to 20 did exist in the 1850s. In 1857, Dred Scott took to the U.S. Supreme Court the right for him and his wife to be free since his slave master had died and Minnesota was a non-slaveholding state. However, the court sided against him stating Blacks and Mulattos were not citizens and also declaring that the 1820 Missouri Compromise (or Compromise Line) was unconstitutional in stating it did not have the authority to prohibit slavery in territories and this ruling allowed for vacationing Southerners to travel to Minnesota openly with their slaves.

The number of free persons grew to 78 by 1863 and most all of them were literate.  Minnesota being a new state with growing agricultural and industrial needs, it needed more laborers and they came in great migration from the South. During a span of 30 years, and with the passing of the Emancipation Proclamation, the Fourteenth and Fifteenth Amendments and then in 1863, the population grew to nearly 1,400 Black people concentrating in certain areas of Minneapolis and St. Paul eventually forming ghetto areas in the 1930s.

However, because the South continued with denying Blacks many freedoms and enacting the Jim Crow Laws, in the 1900s, there was an even bigger exodus to the North with approximately 1 million Black people moving from the South to escape the Slave life for free opportunities. Abolitionists and free wealthy Black people assisted in the growth of the Black population in Minnesota by creating clubs and societies for Black people to learn of job opportunities, learn trades and for socialization and community activism. The overall Minnesota Black population grew from 1910 at 7,084 to 8,809 in 1920. In St Paul the growth was 7.3% from 3,144 to 3,376 in 1920. Minneapolis had a 51.5% increase from 2,592 to 3,927

During the World War II, many white males went off to war leaving jobs and businesses open for Blacks to capitalize on these opportunities. They developed a wider trade in various fields, grew and expanded with the ability to set their children up with better opportunities. Only 1.7% of Blacks over 10yrs of age were illiterate. In St. Paul, the figure was 1.2% (for the country as a whole the rate was 16.3%).

All of the above information is from They Chose Minnesota – A Survey of The State’s Ethnic Groups – June Drenning Holmquist, Editor – MN Historical Society Press St Paul 1981 and excerpts from Slavery in the upper Mississippi Valley 1787 – 1865: A History of Human Bondage in Illinois, Iowa, Minnesota and Wisconsin – Christopher Lehman.

SOURCES: http://quickfacts.census.gov/qfd/states/27/27053.html http://quickfacts.census.gov/qfd/states/27/27123.html http://www.census.gov/prod/cen1990/cp3/cp-3-6.pdf http://www.census.gov/prod/cen2010/briefs/c2010br-06.pdf Other references: 1860s Census http://www.civil-war.net/pages/1860_census.html The McGill Report – 2.17.2003 From Bonga to Brown, the Black Experience in Minnesota http://www.mcgillreport.org/black_history.htm Article of the history of Minnesota Slaves http://minnesota.publicradio.org/display/web/2010/05/07/upper-mississippi-slavery/ Slavery in the upper Mississippi Valley 1787 – 1865: A History of Human Bondage in Illinois, Iowa, Minnesota and Wisconsin – Christopher Lehman 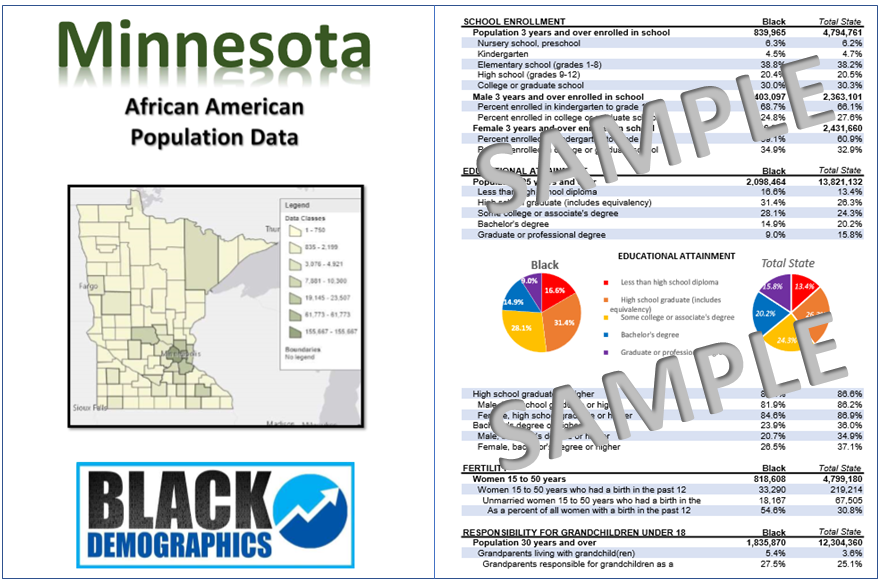